Life is kind of funny in that when you have a deadline approaching, you will of course have more things to do. 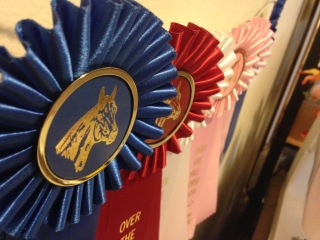 For instance. I had a deadline on Thursday for a manuscript and I’d gotten a later start on writing it than I’d planned, so I was cutting the submission close. Weekends are prime writing/revising time (when I can write a couple thousand words instead of a couple hundred).
So what did I have on Saturday? A horse show. Now, the shows take all day generally, plus preparation in the week before. And then it usually exhausts me, so I’m completely useless the next day.
No pressure.
Thankfully, while the day itself was exhausting, I was able to get up on Sunday and work on the story. I got enough done on Sunday that I wasn’t in a panic on Thursday trying to do One Last Edit before submitting it. The story went out the door!
It taught me two important things: I can hit a tight deadline, and I never want to do that again!
But the horse show (which is a fund-raiser for the 4-H club), went really well. The day was hot, my first horse was kind of a brat, but I still got a ribbon in every class and generally had a good time. There was a BIT of stress in the morning, since the horses at the barn didn’t want to come in, it was going to be too hot to leave them outside, and so we got a late start. Which mean we barely had time to warm up before our classes. I was a tad stressed. Just a tad. But I survived.
Sunday, aside from working on the manuscript, involved rewatching the anime Princess Tutu and knitting. I told you I was worthless after a show 😛 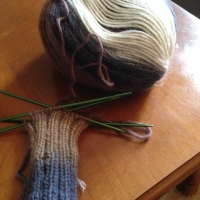 I’ve also started a new knitting project yesterday (because two projects at once just isn’t enough). I’ve had this yarn sitting around for a year or so, and I’ve never been sure what to do with it, but I decided to finally try making full mittens (instead of just fingerless mittens/wrist warmers).
I’m not following a pattern, because I’m sort of just planning on knitting up like normal and then finding a pattern on how to end the mitt part. Should be fine. Right?
Well, if you want to see more of my knitting pictures, I’ll post them on Instagram, I’m trying to actually be active there: AlextheRate. Sorry for the quality. I’m currently using an older iDevice for Reasons.

As my Twitter follows may have heard, I had exciting news earlier this week!

Along those lines, I’ve been rather dead on a lot of social media lately because I’ve been, fancy that, writing.

I have a computer that’s not hooked up to the internet (well, it is but it would take soooo long to do anything on it, it’s  not worth it) and I’ve been hopping over to it to write for a bit every day. To entice me, I’ve set up a Chrome extension on my main computer that blocks all the sites I tell it to. Like Twitter and Tumblr and Facebook and…you get the idea. It forces me NOT to waste time on those sites.

And if I don’t write the whole time during that blocked period? Well, I find I end up doing more stuff around the house.

In the past three or four weeks I’ve written 27K words. I don’t know how much of it is good, but it felt good to write it. And I’m hoping to keep up the serious amount of writing even when this story is done.

So, a book accepted for publication and lots of writing this past month. Of course, I didn’t work on the project I had PLANNED on, but I guess that will be next month. Or something.

Oh! I also finally looked at the feedback I got on GR. I just skimmed the information, and I think some points are valid (and some not so much, but I can perhaps draw attention to the answers that are already in the story). I was glad that the reviewer suggested to emphasize the alternative world elements rather than remove them.

…Oh, I guess that should be my next project.  😀

I’m feeling a little better, most days. At the beginning of July I had a streak of shitty days, but I’ve had a week of fairly good days, so we’ll see.

I’ve been doing some writing, hopping between stories in a confusing way which doesn’t particularly make me happy, but I’m not going to argue with the muses.

I edited a story that I’m debating submitting, but I’m torn. I’m not sure it’s as good as my other stuff, and it’s kind of an odd piece. I know I should probably send it to a beta, but then I have to dig up a beta. So, if anyone likes to beta sort of YA books, then I have something for you 😉

Other than that I’ve done edits on a collection of short stories that I was considering doing a slapdash self-publish thing for (through SmashWords), but may just post it on FictionPress. I haven’t decided.

I’m still waiting to hear back for the one submission (I’m really hoping it won’t take until October), and other than that it’s just some wacky stories, one of which probably won’t ever sell, one which may sell if I can finish it, and one which I’m not sure where it’s going. 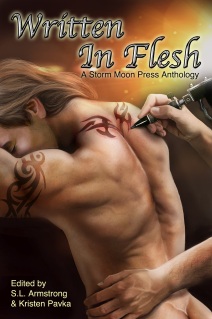 Did you hear that whooosh?

That wasn’t me exhaling in relief, that was the days flying by.

It snuck up on me, but the anthology with my short story “Mark of the Familiar” is due out on Friday, Sept. 13!

You can preorder it here: http://www.stormmoonpress.com/books/Written-in-Flesh.aspx

The anthology is Written in Flesh, so if you like tattoos and gorgeous ink, then check it out 🙂

I got two submissions out the door, both for Christmas/Holiday-theme calls. One is straight up soft, gooey marshmallow fluff, contemporary Christmas story, the other is a fantasy continuation of the already accepted submission. So I got both out, which means victory.

Of course, I still have plenty of work ahead. I made a spreadsheet of my writing to-do list and it’s terrifying how many stories I want to write. Having the time to realize those stories is another matter. I worked this weekend on doing a quick edit on a story (to see if there were plot holes, inconsistencies) and want to write the sequel now (thankfully it was already on the list)…but have a submission due In November that is uber priority.

And I started writing a romance with an asexual lead, but got horribly distracted, so it’s on the back burner for now.

August is a month of mixed emotions for me. When I was a kid, I was torn between wishing summer would never end and wanting school to start again (Shush, I was one of those!). Also, my birthday is in August, so I always got excited about that.

Despite continuing to age, I still look forward to my birthday presents and I no longer dread summer ending, as it just means the weather is going to get nice and cool (before getting VERY cold and me looking forward to April).

This August snuck up on me. I’ve been busy writing 30,000 words for ‘Camp Nano’ (You can see the progression here.) Plus working full time and part time, riding my horses, and flitting around place to place for birthday parties and other familial events.

But, I did get my Camp Nano done (code name BAW), I got back MotF edits (*weeps*), and I finished up and sent out to beta MotF2. I have two stories I want to submit at the end of August, one at the end of October, and several others I’ll get to when I have time to check my pulse! I’m feeling like an actual author, just a bit 😉 Of course, all of these could get smacked down and not accepted, but yeah…that’s part of feeling like an author too 🙂

On a happier note, I have 12 billion stories I want to tell and no idea how many of them will make a complete story. Pretty little trinkets in the mind don’t always translate into a story others want to hear (or stories that the characters want to tell). Some days I just want to make a book of snapshots of various characters. Maybe I will.