If you’re anything like me, you don’t need the turning of a new year to make and break resolutions. But it’s nice to do it all together, isn’t it?

I’m continuing my “monthly goals” (which I hit only slightly more accurately than yearly ones!). I’m trying to up my writing word count and actually hit 120,000 in a year (or 10K a month). Not all those words are going to get published, and some of them are for other side projects not connected to my name, but writing is writing!

One serious goal is to submit The Miracle Man. Which means finally finishing revisions. Which I haven’t touched since….November? I’m a work in progress…

Currently I’ve been using my morning writing time to try to brainstorm the end of a different story (that is only 1/3 written) and takes place in the same world as Mark of the Familiar and Gift of the Familiar, but about a hundred and fifty years in the future (ie, our modern day, assuming similar timelines). I’m excited about this story and the characters (some of whom were not originally supposed to be as important as they are), but something’s hinky and I need to thinky.

So if anyone would like to wave their magic wand and resolve my issues, I’d much appreciate it.

Back in the beginning half of the year, I was working on a project I was super excited about. I was so excited, in fact, that I broke one of my cardinal rules: don’t talk too much about a project.

One of the reasons I have this rule is because it gives my audience expectations of something coming, and I don’t want to let anyone down. A few teases? People will likely forget. A tweet every day for a month? They’ll remember that (hopefully).

The other reason is the same reason I previously never outlined/plotted stories, and even now have to be very careful: if I know too much about the story, my brain decides the story has been told/heard/figured out and doesn’t need to be written. (I do not agree with my brain on this, but ultimate the brain wins.)

And I found a little plot hole in my planned outline, and I tried to think of a solution. And I thought and thought and eventually wore that story out in my brain. It’s not dead, I don’t think, but it’s also not in an exciting part of my brain where I have to write it down.

So I set it aside (and barely wrote for several months….), and when I started my new piece, I’ve said not a thing. I know it’s silly and superstitious, but that seems safer than risking it, right?

The new piece was mostly started on a lark, a “what would happen if I took this setting that takes place in a Victorian-esque world and put it in the modern day?” And I started writing, just throwing whatever I wanted at it. No plotting, just adding pieces as they came. Some plots have begun to appear, but I’m not thinking too far in advance.

It was supposed to be a straightforward “MC meets LI” story, but then the LI has this friend and the MC has a weird connection with the friend as well, so now I have no idea where these folk are taking me. This is a truly magical world 😀

So we’ll see where it goes, we’ll hope that I’ll be more diligent on working on my revisions, and if everyone could send me some positive vibes to get through this dark, cold season with my depression, I’d greatly appreciate it.

With the recent release of Ties That Bind and my pet project done round one, it’s time to focus on this month’s goals!

One goal is to make a newsletter and get it on my site for people to sign up. We’ll see how that goes. I really need to set aside a weekend to do it, so it’s not going to be this weekend. (I’m helping the local 4H club re-paint their show jumps.)

My second, arguably more important, goal is to revise my most recently finished historical fantasy. I’ve gotten good feedback on it, but the end needs a bit of an overhaul, so I’m avoiding it like the plague. But I really love this story and I hope readers will too. Kind of a coming of age tale / road trip. With horses. But it’s also about emotional growth, finding love, forgiveness, and making amends.

So PR and revising to do this month. Two of my favorite things….

Do I get extra points for doing this post before the end of January? I think I should…

I’ve been keeping myself busy so far this year with my writing goals (10K again), revising goals (Just do it *swoosh*), reading goals (book a month, that sounds familiar…), and health goals (lose the extra weight I put on over the past few years).

Of course, I’m a writer so you can assume I’m mostly playing mindless app games, watching TV, and talking on social media about how I should be writing…

But I did do revisions on The Miracle Man, which I’m currently looking for a beta reader for:

I’m looking for a beta reader, focusing on pacing/plot issues, for a light fantasy m/m romance (light on magic, heavy on time spent in wagon traveling). 53K, would love feedback by end of month.

Premise: A young man with a “knack” for fixing things, becomes apprentice to a miracle man in the hopes of learning how to heal people.

I also finished writing a 50+k contemporary that might never see the light of day (who knows), brainstormed a new fantasy story (disgruntled coworkers to lovers is a thing, right?), started brainstorming a second in the same world as Magic Runs Deep, and I’m reading The Left Hand of Darkness which is good but not light.

So I’m keeping busy. I guess it keeps me out of trouble 😉

So spring has kept me busy, as usual, with horses to ride and dogs to pet-sit. Plus I’ve been working on edits for HARD TRUTHS, an M/M contemporary that’s 75% sweet, cute nerds (one of whom is a tattooed biker) and 25% feelings. That’s nearly done, and I hope to be able to share more soon.

Lately I’ve been feeling a bit of writer’s block. Every time I finish a project, it seems harder to get started on the next. In January I finished writing The Miracle Man and between edits, I managed to start and stop a few pieces, and eventually took two months to write (and submit) a 17K short story for an anthology. It didn’t get picked up for the anthology (which has limited space) but is going to be published as a standalone. Then I had a month where I barely wrote 1K. I was a bit of an emotional wreck, so I’m giving myself leeway there!

Then, after some discussion with my writers’ group, I decided to write a short story, which was what I spent May doing. That’s done and with the group for review. It’s only 6K, and it’s not the normal stuff I write (it’s the closest I’ve ever been to literary fiction), so if it gets published, it likely will be under a different name.

Then it was June and I was head off to pet-sit these trouble-makers. The mini-dachshund is Guiseppe and the corgi is Lillibet. 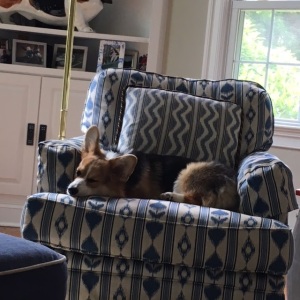 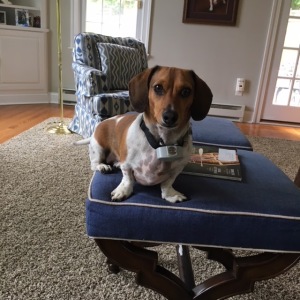 Meanwhile I struggled to come up with my next story, told myself I didn’t need to write immediately, but I wanted to! And so I just started writing a story (involving a dog, I can’t imagine why) and am letting it take the wheel. I’ve also been starting some brainstorming for revising (and adding a fair chunk) to a story I previously finished involving shifters (surprise, surprise). It’s part of a series (maybe), and I’d like to beef up the first in the series before continuing on.

So hopefully you’ll see some more of that as the year progresses. I can’t believe we’re almost halfway through!